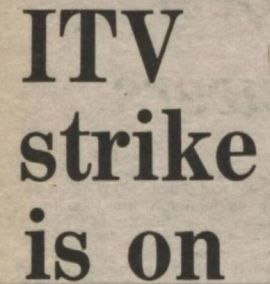 The episode of New Faces planned for this date, despite being edited and recorded, wasn’t shown as scheduled due to a three day strike which affected many ITV regions including ATV across the May Bank Holiday weekend.

An spokesman confirmed that there would be no television from ATV at least until after Bank Holiday Monday if the strike went ahead.  Last-ditch attempts to avert a three-day Bank Holiday blacklist of ITV programmes, covering 6am on 23 May 1975 until 6am on 26 May 1975, collapsed as the two hour talks went on late into the evening.

The dispute was over a claim by the Association of Cinematograph, Television and Allied Technicians (ACTT) for lump sum payments of £231 to 3,500 men, representing cash frozen during wage restraint periods, however the management said that subsequent pay negotiations had accounted for any money lost through the statutory controls.

As a result of the strike the episode of New Faces that should have aired on 24 May 1975 was shown one week later on 31 May 1975.  Acts that were scheduled to have made their TV debut at the end of May 1975 had to wait a further three weeks before they got their three minutes on screen.