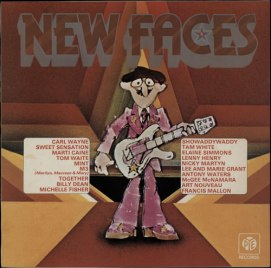 In the summer of 1975 Pye Records released a LP compilation of eighteen tracks from New Faces acts plus the theme tune from Carl Wayne. The selection was compiled by New Faces judge Alan A. Freeman and Les Cocks was credited as the executive producer.  The sleeve notes, which you can read beneath the track listing, were written by show host Derek Hobson.

Side One
1. You’re A Star (Tony Macaulay) – Carl Wayne
The theme tune to the TV series from the very first episode. Sung by former member of The Move, Carl Wayne, and featuring Stephanie de Sykes on backing vocals
2. Sad Sweet Dreamer (D.E.S. Parton) – Sweet Sensation
Sweet Sensation won show 2.2 and were one of twelve acts that featured in the Grand Final of Series Two. Sad Sweet Dreamer reached number one in the UK singles charts in October 1974.
3. Laughing In The Rain (Atlanta James) – Marti Caine
Marti Caine made her first New Faces appearance in show 3.14, which she won and then followed it with success in the second All Winners Final and was crowned the Series Three Grand Final winner to secure a booking at the MGM Grand in Las Vegas
4. The Greatest Love (South) – Tom Waite
Tom Waite won show 1.7 and went on to be crowned the winner of the Series One Grand Final in December 1973.
5. I’ll Meet You Halfway (Farrell, Goffin) – Mint
Mint were the controversial winners of show 3.2 having already made a number of appearances on rival talent show Opportunity Knocks. They finished third in the first All Winners Final of Series Three, beating Les Dennis and Victoria Wood but losing out to impressionist Tony Maiden.  I’ll Meet You Halfway had been a Top 10 US Billboard hot for The Partridge Family, featuring David Cassidy, in 1971.
6. I Will (Glasser) – M3
M3 were sisters Maureen, Mary and Marilyn Stevens and they won show 3.13 but lost out to Marti Caine in the second All Winners Final on their second appearance.
7. Mighty Murgatroyd (John Garfield, Brian Mallon) – Together
Together were beaten by Mint in show 3.2 but got a second chance when thanks to the votes of New Faces viewers they appeared in the first Viewers Winners Final of Series Three.
8. Say No More (Sammy King) – Billy Dean
Billy Dean made just one New Faces appearance in show 3.24 where he was beaten by eventual series runner-up Al Dean.
9. Patched Up Broken Heart (Roker, Shury) – Michelle Fisher
Former Miss England finalist Michelle Fisher was the winner of show 2.9 and made a second New Faces appearance in the Series Two Grand Final in July 1974.
10. After All I’ve Been Through (Mallon) – Francis Mallon
Francis Mallon appeared in show 2.10 and his own song After All I’ve Been Through was the title of a documentary about the New Faces audition process.

Side Two
1. Hey Rock And Roll (Allured, Gask, Bartram, Field, Deas, Challenger, Betts, Oakes) – Showaddywaddy
Leicester based band Showaddywaddy first appeared on show 1.8 and were runners-up in the Series One Grand Final, losing out to Tom Waite. Their first single Hey Rock and Roll peaked at number two in the UK singles chart and they were invited back on New Faces as a guest act in the Grand Final of Series Two.
2. Mr I Don’t Want Your Daughter (Cameron) – Tam White
Tam White made his only New Faces appearance in show 2.8, losing out to eventual Series Two winner Aiden J. Harvey.
3. Killing Me Softly With His Song (Fox, Gimbel) – Elaine Simmons
Elaine Simmons finished twelfth on the Series One Grand Final having won the very first show of the series.
4. Pick Me Up When I’m Down (Budd, Masters) – Lenny Henry
Young comedian Lenny Henry won show 3.17 but was beaten by Al Dean in the third All Winners Show of Series Three. That wasn’t the last we saw of Lenny however, as the New Faces viewers votes put him in the second Viewers Winners show of the series which he won to secure a place in the Series Three Grand Final where he finished in fourth place.
5. And Now You’re Gone (Ball, Arthey, Bennett, Rutherford) – Nicky Martyn
Comedian Nicky Martyn made his first appearance when he won show 2.4 and he went on to feature in the Series Two Grand Final, which was won by Aiden J. Harvey.  He returned several times during the third series when he was the guest host of the All Winners and Viewers Winners Finals as well as the compere of the Series Three Grand Final.
6. One More Rainy Day (Waddington) – Lee and Marie Grant
Vocal duo Lee and Marie Grant won show 3.10 and appeared in the second All Winners Final of Series Three, which was won by Marti Caine.
7. My Boy (Martin, Coulter, Bourtare) – Anthony Waters
Actor Anthony Waters was a Series One Grand Finalist having previously won show 1.3
8. Music Man (McGee McNamara) – McGee McNamara
McGee McNamara won show 3.18 and featured in the third All Winners show which was won by Al Dean.
9. See You Ma (J. Meeham) – Art Nouveau
Art Nouveau are one of the few acts to appear in multiple New Faces series. They first appeared in show 1.3 and were one of the acts voted back by the viewers and won show 2.1 which kicked off series two.  They made their third appearance in the Series Two Grand Final.

New Faces made a quiet entrance onto our television screen in the Midlands in July 1973. It was to be an experiment where acts would be assessed by a panel made up of people in the entertainment industry. Would it work?

That week it was number one in the ratings.  The rest of the country saw the next show and by the end of its first series New Faces was established in the TV Top Twenty.  This album reflects some of the remarkable talent lying around waiting to be tapped.  One act, above all others in the first three months exploded onto out television screens – eight young men from Leicester reviving Rock ‘n’ Roll.  The song they sang on the show was to become a number one Hey Rock ‘n’ Roll from Showaddywaddy.  Their first LP has sold more than 100,000 copies.  Winner of that first series, and an easy winner too, was Tom Waite.  He impressed everyone with his powerful voice and his name is one to look out for in the future.

Since Sweet Sensation, winners in the second series, have joined Showaddywaddy in the hit parade.  Talented vocalists like Billy Dean, Michelle Fisher and Elaine Simmons have stamped a lasting impression on viewers and the entertainment industry alike.  There are some surprises on this album – Nicky Martyn and Lenny Henry, both comedians, are featured as singers and comedienne Marti Caine proves she has got a fine voice as well.  Music man Mcgee Mcnamara didn’t even audition for the show, he was discovered busking in a London subway.  One week an actor, Antony Waters, was placed first by the panel and he has chosen the Presley hit My Boy.

Three other groups featured on the album are Brighton band Together, Mint from Leicester and a lovely bunch of people, Art Nouveau who made three appearances on the programme and left us lasting memories with an original son See You Ma.  Our only duo on the album were winners on the present series Lee and Marie Grant, a record company’s dream, they write all their own songs.

One song After All I’ve Been Through sung by a young schoolteacher from Newry, Francis Mallon, was the theme of a documentary showing just how tough it is to earn an appearance on New Faces and looking on all the time our inscrutable panel.  I know you have your likes and dislikes. Sometimes it is difficult to get into the office with all the letters addressed to ‘Dearest Clifford’ and ‘Darling Tony’! But one of our panel, Tony Hatch, has steered the career of Sweet Sensation. Mickie Most, after watching Tam White on the show, expressed his feelings in one word ‘Triffic’.  One week three lovely sisters from Buckinghamshire made such an impression on George Elrick that I remember saying on the show ‘Will you record them?’  He is as good as his word and you can hear the result with M3.

So there you have it, a small sample of the acts that made it. There are 15,000 others that didn’t, and it was our little man beating his drum and singing You’re A Star who first introduced them to you.  I am sure the next series will discover many more talents. Of course, in the end, their impact depends very much on you. you, always, are the final judges on New Faces.